Are you suffering from a potential Lisfranc injury?

The Omaha Foot & Ankle Specialists at MD West ONE are able to properly diagnose and treat Lisfranc (midfoot) injuries through both surgical and non-surgical treatments. If you have the following symptoms, you may want to make an appointment with one of our Board Certified Specialists.

Meet MD West ONE's foot and ankle specialists and learn more about how they treat a Lisfranc injury. 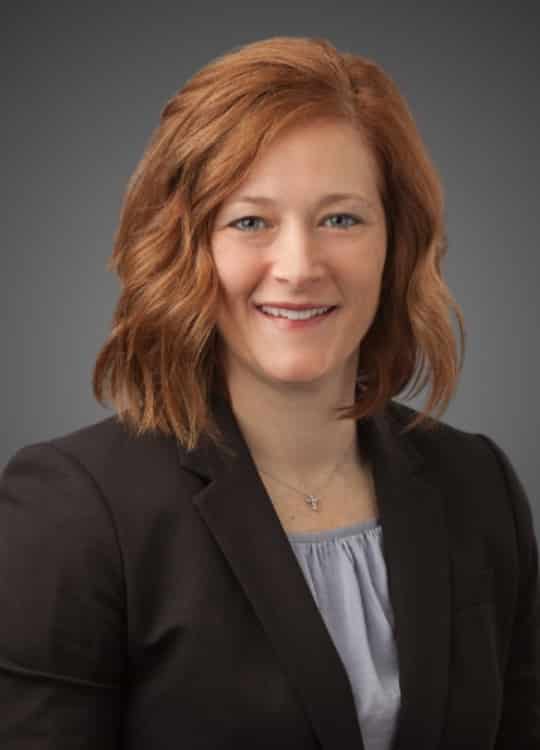 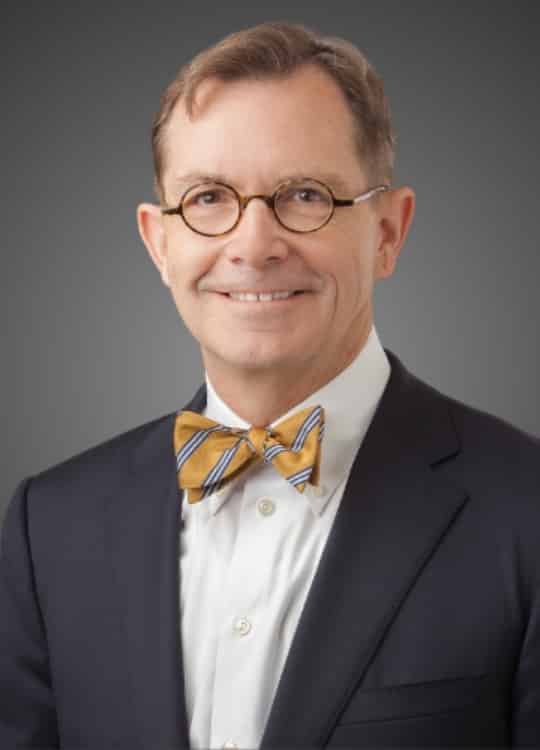 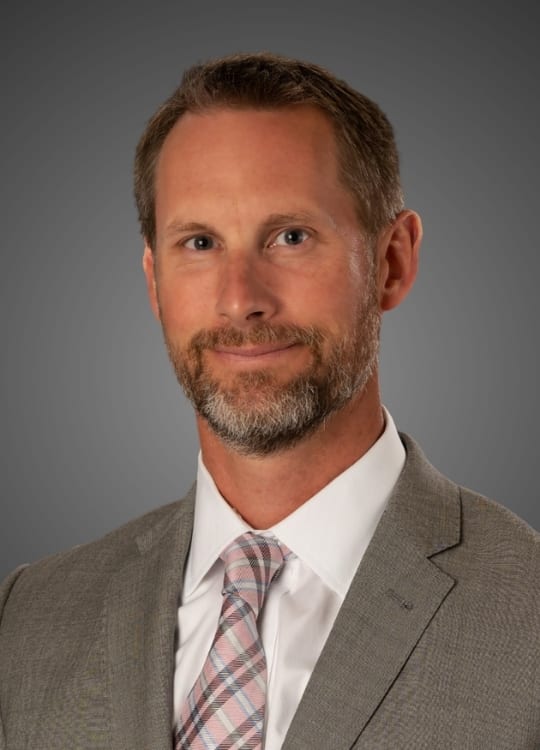 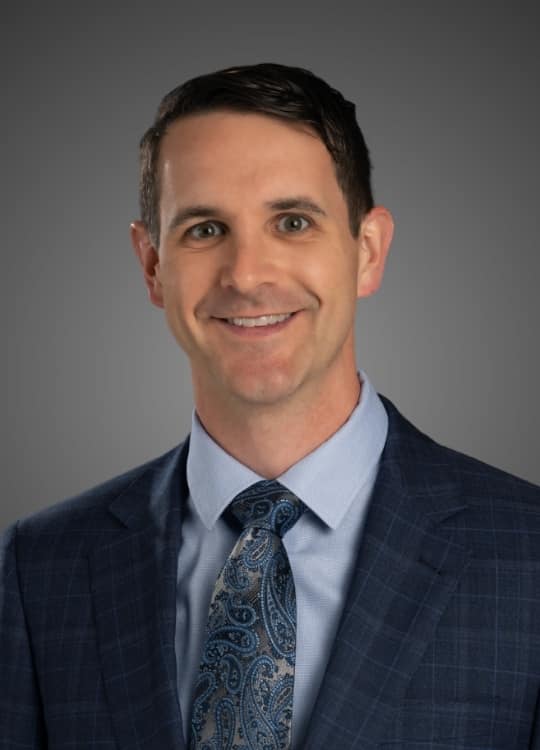 What are Lisfranc Injuries?

Lisfranc injuries are the result of bones in the midfoot that is broken or ligaments that support the midfoot that is torn. The severity of the injury can vary significantly from tearing a single ligament too complex, involved in many joints and bones in the midfoot. A Lisfranc injury is often misdiagnosed as a simple sprain, especially if the injury is a result of a straightforward injury such as a twist or fall.  However, a Lisfranc injury is very different than a simple sprain and should not simply be walked off. It is an injury that often requires surgery and may take many months to heal.

The midfoot joints (Lisfranc joints) can be injured with both low and high energy injuries. Low energy injuries can happen with a simple twist or fall. This is commonly seen in football and soccer players, but can also happen if someone stumbles over the top of a flex foot during everyday activities. More severe injuries often occur from direct trauma, such as a fall from height or a car accident. These high-energy injuries can cause multiple fractures and dislocations of the joints. As a result, the cartilage that covers the end of the bones in the joints can be damaged. This can lead to increased stress across the midfoot joints which can result in both collapses of the arch and arthritis.

The bony structure of the midfoot is composed of joints of the wedge-shaped metatarsal bones that extend out toward the toes with their corresponding cuneiform bones. Important features of the boney anatomy include:

The bones in midfoot are held in place by connected tissues called ligaments that stretch not only across the foot but also down the foot. There is no ligament connecting the first metatarsal with the second metatarsal. As a result, a twisting fall or other traumatic injuries such as a car accident can break and shift these bones out of place.  The interosseous ligament commonly referred to as the Lisfranc ligament, is the strongest and most important ligamentous restraint of the midfoot.

The midfoot is critical in stabilizing the arch during walking and jumping activities.  The midfoot transfers the force is generated by the calf muscles to the front of the foot allowing the heel to rise and propel the body forward.

What will be looked for during a physical examination

Click the button below to download the PDF version of this information. By downloading the PDF, you can easily print the resource or save it to your desktop or mobile device for future use. 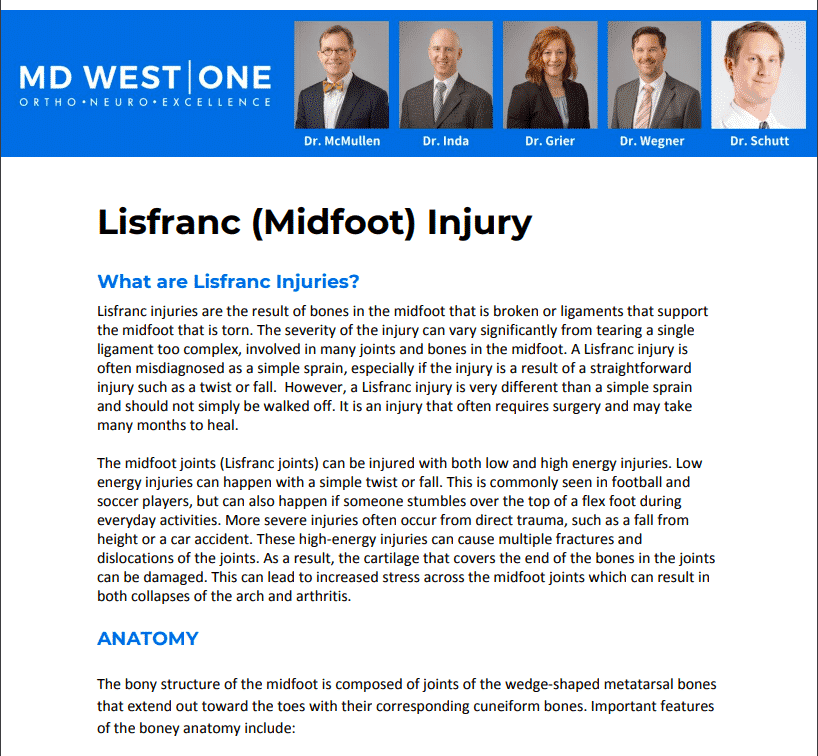 Treatment of a Lisfranc injury depends on the severity of the injury and whether it has resulted in any instability in the midfoot. Unstable injuries often require surgery, while stable injuries can be treated without surgery.

When there are no fractures or dislocations of the joints, nonsurgical treatment may be that all that is necessary. In this situation the ligaments have not been completely torn, and heal on their own as long as they are protected.  I nonsurgical treatment plan often includes wearing a non-weight-bearing cast or boot for six weeks.  Weightbearing is then slowly progressed in a boot or a cast over the next 4 to 6 weeks until the patient has full weight-bearing around three months after the injury. Occasionally, recovery will also include using orthotic arch support as the patient progresses toward normal activities. During the recovery process, the doctor will arrange regular follow-ups and take additional x-rays to make sure the foot is healing well. If there is any evidence that the bones have shifted or moved during the recovery period, then surgery will be needed to realign and stabilize the bones.

Open reduction, internal fixation: In this procedure, the bones of the midfoot are positioned correctly (reduced) and held in place with plates and screws allowing them to heal in the appropriate position. During this surgery, plates and screws are placed across the joints that have some degree of motion.  For this reason, some or all of the hardware may be removed later as it can weaken and break over time. If the surgeon plans to remove the hardware, it will often be done be between three and five months after the initial surgery.  Occasionally, the hardware can be left in place if it does not bother the patient.

Fusion: Certain types of Lisfranc injuries that damage only the ligaments, or result in a significant amount of cartilage damage, a fusion may be recommended as the initial surgical procedure. In a fusion, the bones grow together so that they heal into a single, solid piece.

The joints of the midfoot often involved in a Lisfranc injury have very little motion and mainly transfer stress from the front of the foot to the hindfoot and ankle.  Fusing the joints, therefore, can result in a very normal gait. Because the bones grow together to single, solid piece, the plates and screws will not weaken and do not need to be removed.

After either an open reduction, internal fixation surgery, or fusion surgery, a period of non-weightbearing for 6 to 8 weeks is recommended and either a cast or a boot. After the initial weight-bearing portion, the doctor will allow slow, progressive weight-bearing initially in a boot and subsequently in a supportive tennis shoe.  If the patient had an open reduction, internal taxation surgery, impact activities including running and jumping should be avoided until the hardware has been removed.

Most recreational athletes are able to return back to their pre-injury level. However, these injuries can often damage the joint cartilage which may ultimately result in arthritis, pain, and progressive deformity what time. In these situations, an additional surgery to fuse the midfoot may be required.

All of the foot and ankle surgeons in the practice are recognized members of the American Orthopaedic Foot & Ankle Society. It is the oldest and most prestigious medical society dedicated to the foot and ankle. The mission of the society is to advance science and practice of foot and ankle surgery through education, research, and advocacy on behalf of patients and practitioners. These physicians dedicate their time and energy to improving the patient experience and their knowledge in their field. For more information visit http://www.aofas.org.

The Foot & Ankle Specialists are all Board Certified and Fellowship-Trained, meaning they’ve focused their education, training and research on orthopaedic surgery of the foot and ankle.

Are you suffering from foot or ankle pain? Don't wait any longer to get relief. Make an appointment to see one of our foot and ankle specialists